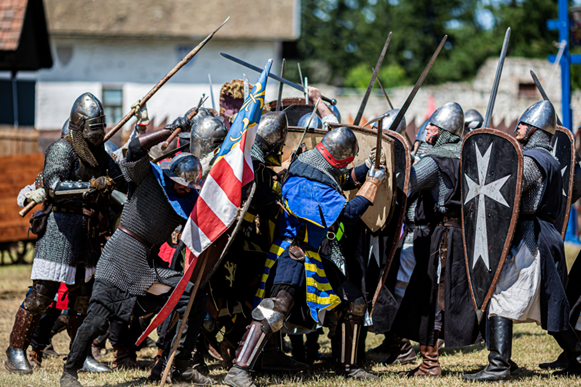 The International Palace Games of Visegrádv are held annually in Visegrád – a small castle town in Pest County, Hungary – on the second weekend of July, since 1985. As the largest medieval festival in Hungary, it attracts participants from neighbouring countries, Czech Republic, Hungary, Poland and Slovakia but also from Italy, Germany, Romania, Serbia, Slovenia and Austria.

The festival celebrates the famous royal meeting of 1335, when King Charles I of Hungary, hosted a two-month summit with the Bohemian king, John of Luxembourg, and the Polish king, Casimir III, which was crucial in establishing peace between the three kingdoms, as well as in securing an alliance between Poland and Hungary. The Palace Games of Visegrád have been a reminder of this extraordinary consensus and have strengthened and developed the cultural cooperation amongst the participant nations.

The 3-day event has a diversified programme with performances and shows of Hungarian and foreign participants – hundreds of re-enactors, musicians, dancers, comedians and jugglers – in a uniquely authentic environment to which a medieval market offers its colour.

“Since the early days, the Palace Games were organized in a bottom up process with the strong collaboration of Visegrád population who deals with most of the logistics of the event. Although this has been a successful approach, further development of a more solid business model is needed”, considers the organization.

In this regard, and as part of RURITAGE project, the rural enhancement plan for this region aims at strengthening the Visegrád brand – including the different cultural and natural programmes – by implementing several actions such as digitalisation of he offered activities (festivals, excursions, cultural programmes, local food, leisure activities), programmatic extension and increased marketing in the region in order to improve the quality and reach not only of the festival itself but the whole region. The creation of tourist-packs that include several activities related to the festival, such as “Middle Age food menus” or “Medieval Poetry” performances, and the networking with other medieval festivals across Europe, are other actions that enable the region’s promotion through the use of the local natural and cultural heritage. Considering Visegrád is one of the 3 significant royal towns of the country, the Hungarian Tourist Agency and the government also support the development of Visegrád.

With this in mind, during the International Palace Games a survey was conducted amongst visitors to gather information that will allow the creation of a platform connecting several cities and heritage of the region, thus creating a harmonised touristic offer.