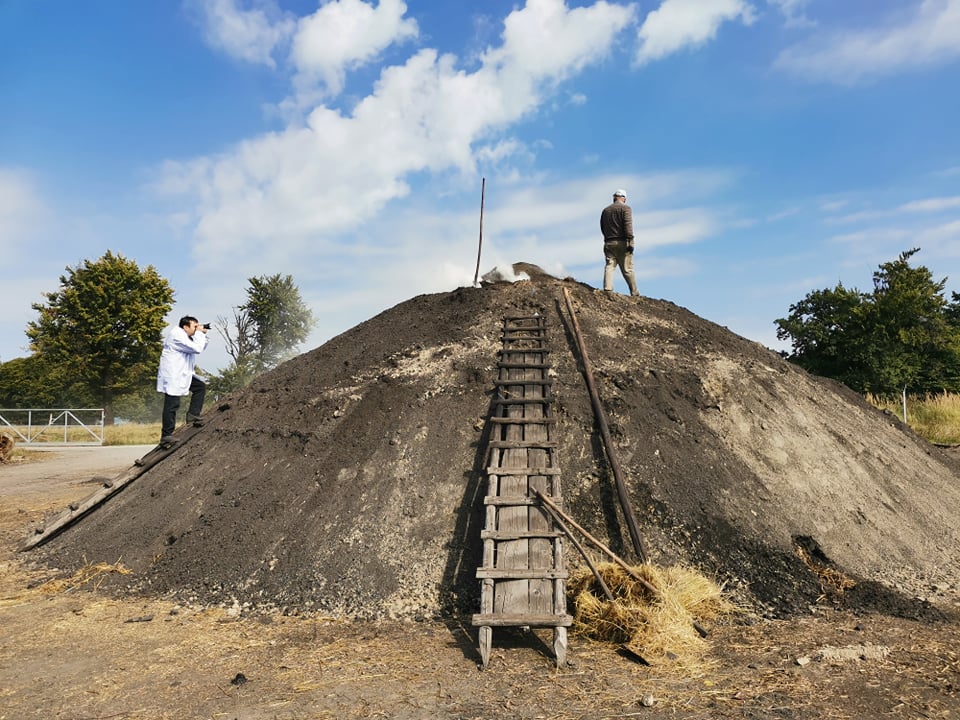 Involving several artists from Bucharest, Cluj Napoca and Harghita County and in collaboration with the Farkaslaka Mayor’s Office, Harghita County Cultural Centre and the Harghita County Centre for Conservation and Promotion of Traditional Culture, Pro Educatione – a network of fifteen adult education provider organizations of Alba Iulia roman-catholic Diocese – and the Harghita Council, RURITAGE’s partners, brought the “Carbunart Summer Artistic Camp” to life in the first week of September.

This artistic workshop gave the artists the opportunity to learn more about the century-old charcoal production activity, to visit attractions along the local routes of Via Mariae and to create a series of contemporary art-works using locally produced coal.

With few local producers left, traditional charcoal production – in which wood chunks are piled in a tower-like structure, covered with sand and earth, and set on a flameless low-oxygen combustion for near two weeks – is one of the traditional crafts of the region in risk of disappearing due to new production technologies which are less time consuming and allow a bigger volume to be produced.

This activity was developed in the context of the region’s rural enhancement plan which, amongst other activities, created an inventory of several relevant crafts and traditional activities and included them in the touristic offer for pilgrims as a way to valorise local heritage.

Harghita County in central Romania, is a mountainous region known for its therapeutic waters and coniferous forests, reason why the region called the “evergreen land”.

In the region, the Via Mariae pilgrimage route to Şumuleu Ciuc / Csíksomlyó is one of the most important pilgrimage routes in Central and Eastern Europe. Mary’s Way, as it is known in English, crosses Austria, Hungary, Romania, Slovakia, Poland, Croatia and Bosnia. By welcoming all types of visitors and offering a diversity of experiences, the way aims to be a bridge between religions and people connecting East and West, North and South.The final destination of the pilgrimage route is the Franciscan Monastery and Church in Șumuleu Ciuc (Csíksomlyó).

By focusing on the tangible and intangible heritage of several rural communities in the area, specifically assets of built cultural heritage, traditional activities and handicrafts of the villages along the Via Mariae routes, Harghita County aims to boost the economic and cultural value of the region. As part of this enhancement process Harghita Council and ProEducatione have also identified unused buildings to be transformed into shelters for pilgrims and included traditional local foods and farms along the Via Maria pilgrimage route in the offer for pilgrims.